Steve Keane nails it once again, with his take on the Sheffield drama. Although most fans are quick to call Sheff a baby, it's actually hard not to sympathize with his side when you think about it.

...all he did was be the consummate pro. He played through hurting legs when the team was short of sluggers he went out and played a better than average left field. Sheffield produced more than anyone could have hope for. So with the Mets clearly out of contention the logical move would be to put him on waivers, see who bites and if someone does, make a deal. General Managing 101.

I have to say, I too would be annoyed if I were in Gary's shoes. The Mets don't want to trade me to a contender, and they won't discuss a contract extension for 2010. Wonder how Dwight Gooden feels about this?

Then again, Adam Rubin makes a compelling argument as well!

If you sign up to play for a team, and that team decides to keep you for the entire season, how exactly can you have any legitimate gripe?

The Mets could have saved about one-sixth of Sheffield's $400,000 salary by letting him go to the team that claimed him. And then what? Don't the Mets have to field a competitive team for the rest of the year? (Or whatever you'd label what they are right now.)

And while Sheffield shouldn't be begrudged for requesting a 2010 contract, when it was spurned, how about going back out on the field that night and proving you merit it?

Point. Counterpoint. We report, you deride.
Posted by Mike V at 1:59 PM 1 comment:

The Livan Hernandez Era Is Over

OK, one last time:
Livan wears his war wound like a crown.  He'll have to sell cartoon ballons in town, because he's not a Met anymore.  While Livan Hernandez surprised us all by winning the 5th starter position out of Sping Training, and was probably our best pitcher in April, Livan has finally run out of gas for us, and had to be released to make way for...  Billy Wagner.  Billyball is back in New York, sports fans, at least for now.
Posted by Mike V at 4:38 PM 1 comment:

Mets Police passes along a link to an article where Tom Seaver essentially says that the Joba Rules could be detrimental to Joba Chamberlain's long term career. There's probably something about wine in there too, but I don't know for sure, I didn't read the link.
Posted by Mike V at 4:41 PM 2 comments:

Nice catch by Andrew Vazzano to pass along word from Twitter that one-time Mets nemesis, and twice-Mets headache Bobby Bonilla will start collecting paychecks from the Mets in 2011, as part of the buyout agreement when they released him in the Bobby Valentine era of 2000.

Sent to you by Mike via Google Reader:

Bobby Bonilla’s back on the payroll in 2011 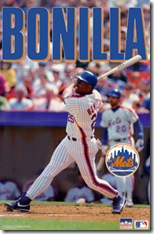 Joe Foriello of DisgruntledMetsFan.com just tweeted something that I had completely forgotten about.

Does anyone realize that starting in 2011, the New York Mets will pay Bobby Bonilla $1.2 mil / year for 25 years? What an organization!

When the Mets released Bonilla in January of 2000, instead of picking up the $5.9 million owed to him for that year, they agreed to pay him nearly $1.2 million over the course of 25 years.  That's almost $30 million.

Might as well bring him back as a coach somewhere for that much money.  Or have him cut the grass at Citi Field.

Or maybe he can play left field.

Things you can do from here:

Wondering whatever happened to 1999 NLDS hero, ex-Mets catcher Todd Pratt?  He's a coach for the Douglasville Bulls, of the Metro-Atlanta based independent Sunbelt League.
Posted by Mike V at 8:21 PM 1 comment: