I hate agreeing with Wallace Matthews, but I do 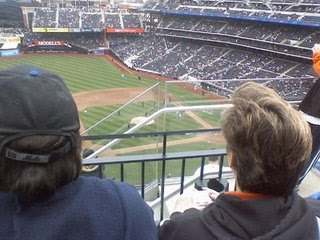 I usually take umbrage with the way Wallace Matthews takes any opportunity to slam the Mets, but I begrudgingly admit that I often agree with his rants.  Today is one of those times - his column discusses the surprisingly low attendance at Mets and Yankees games.  The owners will want to blame the economy, but that's only half the story.  This season will likely be the fewest games I've gone to in about 15 years, and for three of those years I lived in North Carolina!  I haven't directly been impacted by the economy, but the way the Mets have structured the price of a ticket, plus the hidden surcharges, plus the price of parking, and the way they built the damn ballpark so that only those who pay triple-figures can actually get a good view, I am less than enthusiastic about making the trek to a game.  Shea was a dump, for sure, but at least those in the upper tank could see the whole field for under $15 a seat.  Mezzanine and Loge seats behind the plate were great views for less than $40 most nights.  Citi Field is just one big rip-off.
Posted by Mike V at 11:35 AM No comments:

The Ramon Castro Era Is Over

I am very happy today, as the Mets won an 11 inning thriller with a game winning hit by Omir Santos, as well as because the Ramon Castro Era is over. I have never been a fan, and am glad that we will see more of Omir. It occurred to me, with news that the Mets have acquired minor league outfielder Emil Brown, that the Mets must surely lead the league in players whose first names have just four letters:

Remember, as tempting as it is, NO GLOATING about injuries to competing team's players!
Posted by Mike V at 9:00 AM 1 comment: 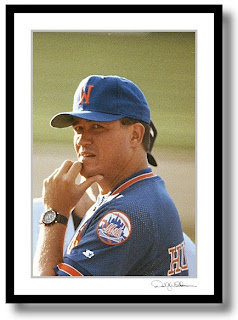 Before moving on to the Rockies organization, Hurdle managed the Mets A, AA, and AAA farm teams.

Joe Torre says that Manny Ramirez should decline an invitation to the All Star Game if selected.

“To me, I think the significance of the All-Star Game is to reward players who have a good first half,” Torre said. “We don’t always do that, because it’s a popularity vote, for the most part. If you want to include the fans, that’s how it’s got to be.”

Really, Joe? It's to reward players who had a great first half? Is that why you selected seven Yankees to the 2001 squad when none were voted in by the fans?

METS BOOK REVIEW: Faith And Fear In Flushing: The Book

If you're a fan of Faith And Fear In Flushing: The Blog you've likely already picked up Faith And Fear In Flushing: The Book. Greg and Jason's blogsite has long been called "The Blog For Mets Fans Who Like To Read" so I guess it's only natural for the blog to become a book! The site's postings consistently articulate what Mets fans collectively are feeling at any given time. If you're a Mets fans you leave the site feeling validated and with a sense of camaraderie in your emotions. Greg Prince's book does exactly the same thing. Sometimes as Mets fans we feel like we're constantly having to explain our fandom. Some folks think we just choose to be contrarian. Yankees fans sometimes malign us for sticking with a faux-underdog. They don't get it. We're Mets Fans because we're Mets Fans, and I could spend a thousand pages trying to explain it but instead I'll just direct you to Greg's fine book for what must be the best articulation of what it's like to be a Mets fan between two hard covers.

The well-deserved positive reviews are pouring in, and if you haven't been convinced enough yet to purchase this tome, I'd like to list just a few of my favorite things about Faith and Fear in Flushing: An Intense Personal History of the New York Mets

It's written by a blogger! If you're a blogger you can't help but feel like we were all published along with Greg Prince. Don't you just feel totally validated? And hey, if your significant other can't fathom why you would want to spend countless hours on the computer blogging at the moon, it is especially helpful to be able to hold up a real live book published by a real live publisher and say "See here, this book was written by a blogger! That could be me someday!" Or at least, "Hey, look here in the acknowledgments! This guy Dave Murray is a Mets blogger too! I could be named in an acknowledgments section someday!"

There's an entire chapter devoted to the 1997 Mets. 1997 was one of the most fun seasons for me as a fan of the Mets. Carlos Baerga, John Olerud, Matt Franco, Edgardo Alfonzo, and my all-time favorite manager Bobby Valentine made for one of the most gratifying seasons as a season can be without winning a damn thing, and I'm not the only one who remembers it as such!

The Afterword with Gary Cohen. Greg transcribes a conversation with Gary Cohen, and they talk about the closing of Shea Stadium, and if you didn't already believe that Gary was one of us, these few pages assert that we're all in this together. And that for me is what this book is all about. That sense of community among Mets fans, simultaneously optimistic and bitter, and always believing.