Jason, from Faith and Fear in Flushing, is in San Diego this week, so decided to take in a game at Petco Park.  If you're a Mets fan who is looking to transplant to another city, San Diego is a fine choice.  I've been to a Petco game myself, and got to see Mike Cameron and Mike Piazza in their San Diego days, and think it's a great place to see a ballgame.  You should take a moment to check out Jason's review here.
Posted by Mike V at 8:51 AM No comments:

Breaking News: John Maine may be done for season

I logged on to Newsday.com this morning so I could see how badly it still looks, when I saw that they have a report that states John Maine may be on the shelf for the rest of 2009:

Mets pitcher John Maine will seek a second opinion on his injured right shoulder, multiple sources confirmed Thursday. Maine, who went on the disabled list June 12 with a pinched nerve in the shoulder, is expected to visit Dr. James Andrews in Birmingham, Ala., in the next few days, sources said, indicating that his season may be in jeopardy.

How exactly does anyone in the Mets medical department still have a job?
Posted by Mike V at 8:40 AM No comments:

Day One of New Newsday.com Format: Thumbs Down

Newsday.com has redesigned (again), in the next step in their effort to generate revenue through their online presence.  Well, it's only been a day, but I have to give it a hearty thumbs down so far.  The site is slower, clumsier, ugly, difficult to navigate, and archaic:  the blogs are not even RSS functional, nor even have comment section set-up.  And you expect us to pay for this?

In April, Newsday announced that they "plan to end the distribution of free Web content and make our newsgathering capabilities a service to our customers."   Poor first step, folks.   Who would pay for this?
Posted by Mike V at 9:43 PM 1 comment:

Head To Citi Field and see a winning Mets ballcub. 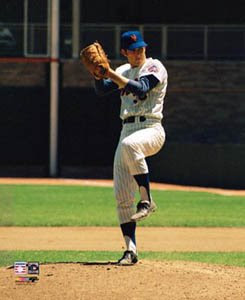 I've seen the Mets play three times this season (twice at Citi and once in D.C), and the Mets are 0-3 in those games.  If you want to be guaranteed to see a winning Mets team this season, head to Citi Field on Saturday, August 22, when the 1969 Mets will make an appearance.  Tom Seaver will be there, so if you're watching the game at home I am sure can tune in to the TV broadcast at some point to hear about his winery.  But I'm excited to hear about Nolan Ryan's planned appearance.  As everyone knows, the Mets franchise is bitten by the Nolan Ryan curse.  In 1971 they traded a young Nolan Ryan, for Jim Fregosi.   Nolan would go on to pitch seven no-hitters across his major league career (which lasted a mind boggling 27 seasons).  And of course, the Mets as a franchise have never had a pitcher throw a no-hitter.  Thus, the Nolan Ryan curse.  Can the Mets Reverse The Curse by inviting their 1969 star to Citi Field?  Wait and see, wait and see...
Posted by Mike V at 12:59 PM No comments:

This has been a season of one embarrassment after another. Opening a $800 million ballpark with obstructed views named after a bankrupt bank, with the first pitch caught by a former player under the glare of steroid allegations, and the bigwigs more concerned about Dwight Gooden's illegal autograph than the fact that the team had no depth, and even worse, no heart. And that was all just the first week of the season.

Now that Tony from Princeton has finally exposed himself as the ass that he is, and Omar has failed to make the postseason for the third straight season, the time is now for a regime change. Jerry Manuel has got to go as well. He told Schmuck Francesca today that biggest drag on teh Mets clubhouse has been waiting for the stars to get back. Why are they waiting for the stars to come back, Jerry? Aren't these all major league players Jerry? I any one of them being paid less than a half million dollars a year to play baseball? How about telling tehse guys that they have the ability to win games without burden of the injured players that choked the last two seasons?

Fire Bernazard, Fire Omar, Fire Jerry, bring in a Moneyball GM like the Red Socks have, bring in Rob Neyer as a special advisor, HIRE BOBBY VALENTINE, install Carlos Baerga as first base coach, and start building a fun ballclub - baseball like it oughta be.

Have the Mets given up?

I know injuries are the most obvious and logical reason for the Mets losing ways this season, but I also think it's a convenient excuse.  I think Jerry Manuel's message of "let's tread water until our big guys get back" has been a detriment to the team.  The 1997 Mets, led by Bobby Valentine, were a lot more competitive, and the most talented player on that team was Todd Hundley.  2009 may be a lost season for the Mets, but Omar shouldn't rest this offseason - this team needs to be rebuilt. Start by shipping out Jerry Manuel, and re-hiring Bobby V.  Then, say "see you later" to Carlos Delgado, Luis Castillo, Brian Schneider, and start building anew.  I also think teh time is now to say "bye bye" to Mr. Beltran.  Trade him while his value is still high.  Build the team around David Wright, Jose Reyes and Johan Santana and K-Rod.  Everyone else is disposable.  We need some fun at Citi Field, and that means players with some personality and passion.  We watch sports for entertainment, and the way these guys lose (and even the way they win), just is not entertaining.
Posted by Mike V at 12:54 PM No comments: