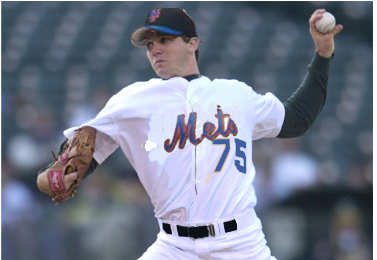 I know there are distractions out there, Mr. Minaya. But please, I implore you. There is only one prize you need concern yourself with, so ignore Plans A through Y, and stay focused on Plan Z. Put Barry Zito in a Mets uniform! The other options are mere mirages.

Roger Clemens says he only would be willing to pitch for the Yankees Red Sox or Astros, but I bet you think you could persuade him to pitch at Shea. Listen, there's only one reason this guy can still pitch lights out at age 90: he's stone cold psycho. You thought you saw the cracks in his psyche when he launched a bat at Mike Piazza? That was nothing. This guy's one busted synapse away from going postal on an entire clubhouse. Forget him.

I bet you think you could trick Jeffery Loria into letting Dontrelle Willis go. Forget it. I know he's got a lifetime 11-2 record with a 2.00 against the Mets, but if you check his stats against other clubs you'll realize the D-Train is running out of steam. And besides, there's only one way you can soil the classiness of a Bentley. Get arrested for urinating in the street next to it, drunk. Goes to show you just can't buy class.

Yes, NLCS MVP Jeff Suppan is available for about half the price of Zito. And I know his stats look pretty good since coming to the National League. But here's the thing Omar, you bring this guy to Queens and he'll be a lightning rod for the media. Appearing in a political ad countering Michael J. Fox might go over just fine in red state Missouri, but that's not gonna fly in New York. Remember when he appeared along side Jim Cavezial urging voters to strike down a stem cell research amendment because he claimed it protected cloning as "a constitutional right?" Only problem: if he'd actually read the 2000 words of the bill he'd have seen it specifically banned cloning. (1) No person may clone or attempt to clone a human being. Now, I don't like to get political on this blog. Baseball is baseball and politics are politics, but at least deal with the facts, man. Cloning people is creepy. Science isn't creepy! More to the point of this blog: Barry Zito isn't creepy!

Sammy Sosa really wants back into baseball. He put on a hitting show in the Dominican Republic today, holding an open workout and launching 15 home runs. He says the year layoff won't hurt him at all:

"Ted Williams went to war and lost a couple years. More recently, Barry Bonds stayed away for more than a year and came back, and the same happened with Frank Thomas because of injuries,"

Wow, that's quite eloquent, coming from a guy who didn't speak English well enough to answer the Congressmen's questions during the hearing on steroids. I know you have a man-crush on this guy, Omar, but please, move away!

Focus Omar, focus. There might not be time enough left to bring us a Barry Merry Mets Christmas, but how about a Zito New Year?
Posted by Mike V at 9:44 PM No comments:

Best of The Blogs

My fellow Mets bloggers are in the holiday spirit this week...

Mets Guy in Michigan rewrites "The Twelve Days Of Christmas" and then posts his favorite Christmas albums of the year.

Dan from Lonestar Mets rewrites "A Wonderful Life" (the whole movie!) as a Mets movie.

Steve at The Eddie Kranepool Society has dreams of a Rios and Zito New Year.

Greg at Faith and Fear in Flushing has apparently been watching Ben Franklin's biography on The History Channel.

Metstradamus blames himself for Chris Woodward's departure to the dark side.

Finally, Toasty Joe takes a break from Isiah bashing to update his list of facts about Carols Beltran's mole.

And don't forget to visit Metsblog and HotFoot for the most comprehensive Mets coverage available!

Happy Holidays!
Posted by Mike V at 8:40 AM No comments:

Zito Zito Zito. It's wall to wall Zito. Will he sign with the Mets, or will he take the money and run to Texas like A-Rod and Chan Ho Park did? No one knows, maybe not even Barry Z.

I have a confession to make.

My wife and I volunteer with Big Brothers Big Sisters, and we've "adopted" an 8 year old boy for the past year. It's been one of the most rewarding things I've ever been involved in, and I highly recommend it to anyone who wants to "give back" but doesn't know what to do.

It's been great. Not only have I felt good about myself for providing a (somewhat) positive role model for an underprivileged youth, but I've also brainwashed a North Carolina kid into being a full-fledged Mets fan. When he gets into the car he even asks me to "Put on that Mets song," and he doesn't mean "Our Team, Our Time." It's great. But here's my confession:

Being Christmastime and all, I thought it was a good excuse to buy the kid a baseball glove. He's a southpaw, so it was hard to find one that fit him, at either Dick's or The Sports Authority. But we did find one. A Rawlings. Sweet looking glove. But here's the bad thing: the glove is endorsed, right in the pocket, with the name "A-Rod." Yes, it's true.

I feel horrible. I only have two possible spins: One, that he gets traded back to the AL West and I can stop rooting against him, or Two, that I can remind my "little brother" that when catching a ball, he wants the ball to land square into Alex Rodriguez's face.

I'm headed to New York for New Years. I intend to make a pit stop at Shea and take some photos of the Citi Field construction. I'll post them here.

So far my favorite news of the offseason is the addition of Howard Johnson to the major league coaching staff. HoJo was my favorite Met during his tenure as a player. I can't wait to chant "Ho JO! HO JO! HO-JO!" on Opening Day...

Zito Zito Zito it's wall to wall Zito. When will we get actual news????
Posted by Mike V at 8:58 PM No comments: